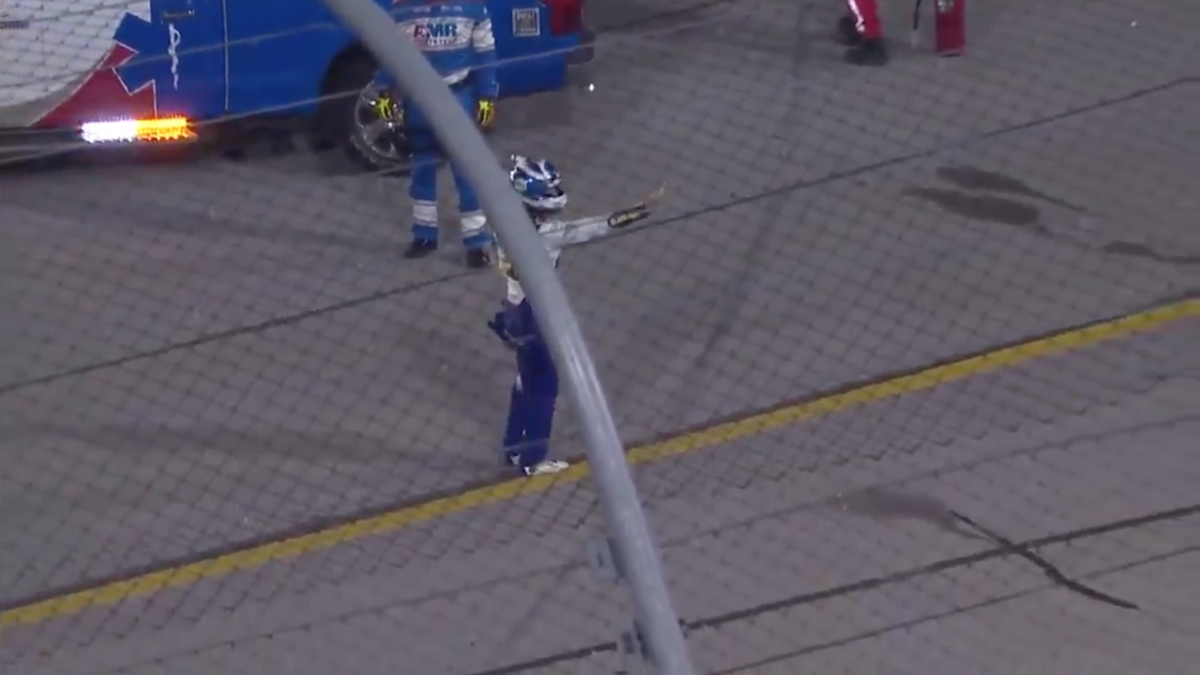 Chase Elliott Flips Off Kyle Busch After Getting Spun

Sports beef is back!NASCAR drivers have some of the best beef in all of sports. Theirs is the only sport where doing something wrong can easily get someone killed. So it’s not uncommon to see drivers hold grudges against one another, or just straight-up fight.Well, NASCAR is back—and so is the beef. Wednesday night’s race at Darlington was shortened by rain, but not before Chase Elliott and Kyle Busch caused a little controversy. With 28 laps to go, Elliott was running second behind eventual winner Denny Hamlin. Busch tried to sneak in behind Elliott but collided with his rear tire and sent Elliott careening into the inside wall. An irate Elliott refused to be checked out by medics until he could give Busch the finger as he came around the track again. Busch recognized that he had messed up, saying after the race that he “made a mistake and just misjudged the gap” between Elliott and the car behind him. Busch spoke with Elliott’s crew, and it didn’t sound like his apology was expected. “They’re upset. They’re mad,” Busch said. “I’m not just gonna fix it and we’re gonna go have ice cream tomorrow. Obviously they’re gonna have to dwell on it and the repercussions I’m sure I’m gonna have later on down the road.”Alan Gustafson, Elliott’s crew chief, was ticked off that his team was denied an opportunity to win. Elliott had a real chance of winning the race, a chance made even greater by the weather. Elliott’s wreck brought out a caution flag, and while the race was still running under caution, rain began. Once the skies opened up, the race was called. Hamlin, meanwhile, may have been saved by the weather. His tires were getting worn down and his pit crew didn’t have enough fresh ones left to give him a whole new set, so they were trying to glue some old ones back together. Let’s see whether there are any fireworks when Elliott and Busch get back on the track on Saturday in Charlotte at the Coca-Cola 600. The best of SIJeremy Lin remains a megastar in China. … An NCAA ruling Wednesday cleared the path for college football players to return to campus for workouts. … Which new venues should host MLB’s next exhibition games?Around the sports worldMichael Jordan’s trainer Tim Grover says MJ made him and driver George Koehler all order the same food after the pizza incident. … After saying a 2020 season was unlikely, the CFL has released its plans to play this year.Appropriately, the race aired on Fox Sports 1Not creepy at allThat’s a bad take, PaulThe field is readyThe parking lots are, tooThe cigar is a nice touchBrady’s on there quite a few timesSomebody had too much time on their handsNot sportsA charity raffle for a $1 million Picasso painting where each ticket cost €100 was won by a woman from Italy. … The much ballyhooed “Snyder cut” of 2017’s Justice League will be coming out on HBO Max.Guy Fieri with a mullet!The people who run Twitter are the stupidestTwo more beers until this turns into into bumper cardsThat seems badA good songEmail dan.gartland@si.com with any feedback or follow me on Twitter for approximately one half-decent baseball joke per week. Bookmark this page to see previous editions of Hot Clicks and find the newest edition every day. By popular request I’ve made a Spotify playlist of the music featured here. Visit our Extra Mustard page throughout each day for more offbeat sports stories.
Read More