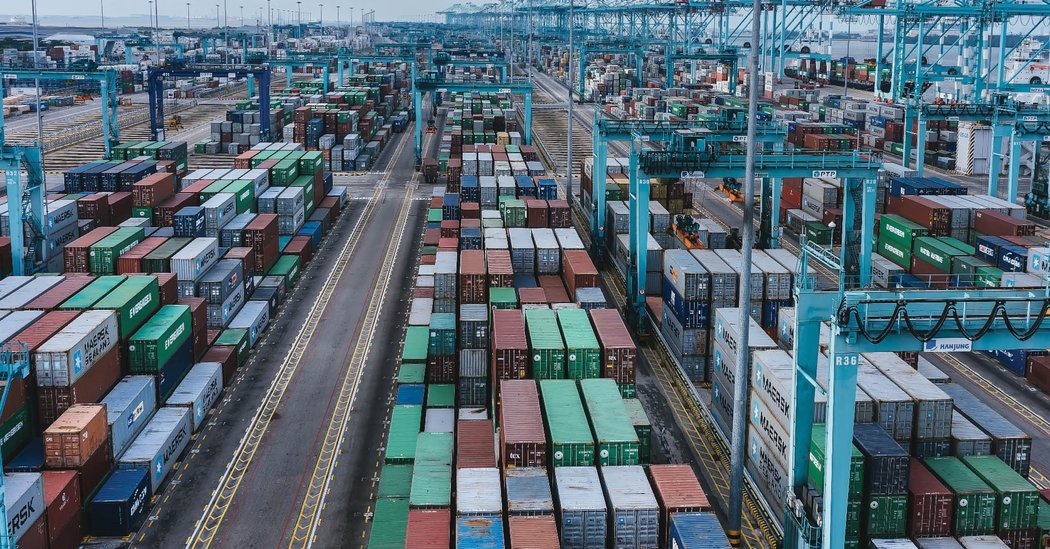 Coronavirus: But weak sales at stores and a stall in export orders raise fears of a possible second downturn this summer.A Maersk depot at the Port of Tanjung Pelepas in Malaysia, where the shipping company is storing some of the many containers full of exports from China that stores in the West no longer want right away.

Credit…MaerskMay 15, 2020, 3:25 a.m. ETIndustrial production surged last month in China more than twice as fast as most economists expected, according to official data released on Friday by the country’s National Bureau of Statistics. But retail sales fell even more sharply than anticipated, while orders for future exports from China have stalled.

Chinese officials are starting to acknowledge a mismatch as the economy reopens.“The recovery of the production side may be slightly faster than the consumption side,” said Liu Aihua, the director general of the agency’s department of comprehensive statistics.The world is watching China’s economic performance closely.

It is a couple months ahead of the rest of the world in coping with the virus and then trying to reopen businesses. Its successes or stumbles could offer lessons to others.Despite signs of progress, the task remains formidable. The Chinese economy shrank in the first three months of this year for the first time since Mao died in 1976.

Inventories of unsold goods are piling up. Shoppers are staying home. Factories are churning out clothes, toys and electronics faster than consumers in China or overseas want to buy them. As the virus spreads around, surveys of purchasing managers in China showed export orders plunging in April. Coronavirus

“We should be aware that given the continuous spread of the epidemic abroad, the stability and recovery of the national economy is still faced with multiple challenges,” Ms. Liu said.The difficulties are prompting more and more warnings that China — and possibly other countries after it — may face a “W-shaped” pattern of economic activity.In such a pattern, the economy nose-dives when most businesses close during lockdowns and then seems to recover when factories and stores reopen.

But with many consumers still scared of infection and leery of spending money, the economy then dips a second time before embarking on a more sustainable recovery.Many economists at Western financial institutions now say that a second dip this summer is more likely than any other scenario and are predicting that Beijing will have to step up government spending to offset the further slowdown.“Supply is significantly outpacing demand,” said Larry Hu, the chief China economist at the Macquarie Group, an Australian financial conglomerate.

“It requires stimulus to get China out of the second part of the ‘W.’”Finance Minister Liu Kun wrote in a column on Thursday in The People’s Daily, the official mouthpiece of the Chinese Communist Party, that China should make more use of fiscal policy to maintain economic growth. It was the clearest signal yet that when the country’s legislature gathers at the end of next week in Beijing, China may unveil an expansionary budget that creates a larger deficit and approves the issuance of more government bonds.Coronavirus

The National People’s Congress is scheduled to convene for its annual session starting on May 22, 11 weeks after it is usually held. Beijing also announced on Friday that it would ease restrictions on banking and other financial services among Hong Kong and adjacent areas of mainland China in an attempt to increase economic growth there.Some economists are already optimistic. According to the government’s China Academy of Information and Communications Technology, shipments of smartphones to stores and other retailers within China were up 17 percent in April compared to the same month last year.Coronavirus

That strong demand suggests that tens of millions of Chinese had the wherewithal to upgrade their phones even after the pandemic faded, said Xu Sitao, the chief China economist at Deloitte.As the world’s largest oil importer by a wide margin, China is also enjoying a huge windfall from the plunge in global oil prices. “China’s growth this year could surprise on the upside,” Mr. Xu said.New coronavirus infections had largely disappeared in China by the start of last month, according to official reports.

Only a dozen new, locally transmitted cases were officially acknowledged nationwide in the first week of April. Data suggest that practically all factories and many other types of businesses were open throughout last month.Strong exports kept factories busy last month. Many industrial complexes were catching up during April on orders placed while Chinese cities were locked down.

The country’s industrial production was up 3.9 percent from April of last year. Industrial production had been down 1.1 percent in March from a year earlier and had plunged in February, when the virus outbreak was at its worst in China.But shopping and fixed asset investment stayed weak. Retail sales were down 7.5 percent in April compared to a year earlier, marginally worse than economists’ expectations, although considerably better than sales in March.

Tens of millions of migrant workers are unemployed. Estimates of overall unemployment run as high as 20 percent. Many white-collar workers have suffered pay cuts.“You can’t get people to spend money if they don’t have money or have a way to get it,” said George Magnus, an economist at the Oxford University China Center.
Read More