DeAndre Baker: What did scouts really think of him before 2019 NFL Draft? 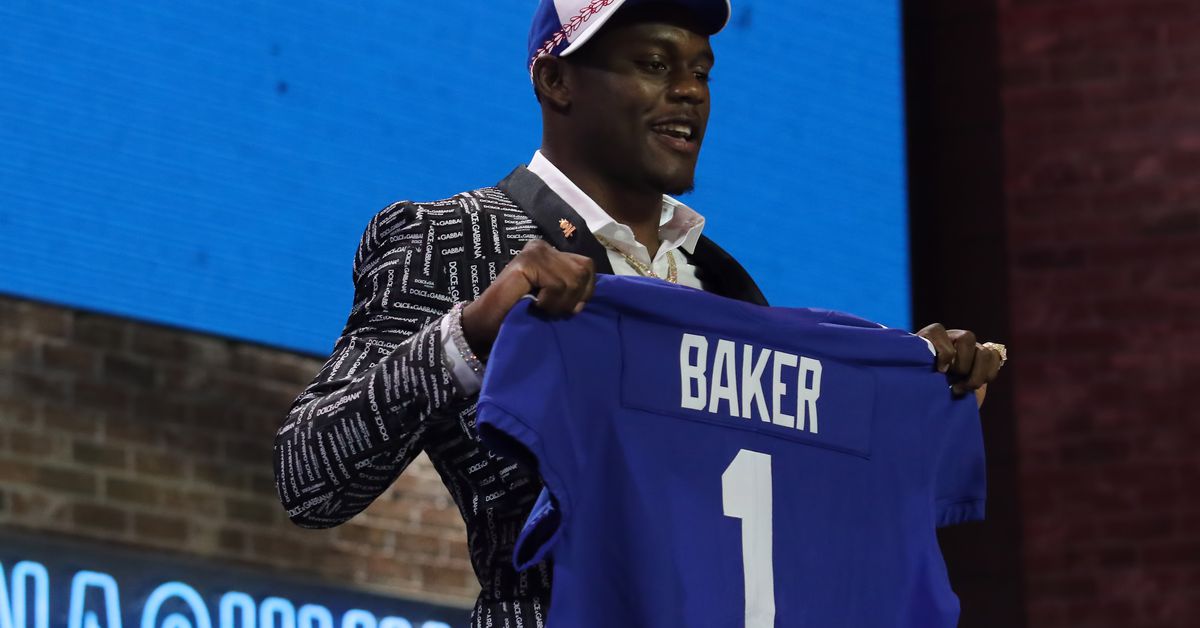 In the wake of DeAndre Baker’s arrest on four counts of armed robbery and four counts of aggravated assault with a firearm, much has been made about “red flags” surfacing regarding Baker prior to the 2019 NFL Draft.
The most damning was from Tony Pauline of Pro Football Network, who said someone from the Giants told him Baker was “dumb as dirt.”

“Sources were telling me he was not taking combine training seriously,” Pauline told The Post. “He was kind of an entitled type of kid, he expected things to come very easy to him, he didn’t look good in drills. And then if you go back, and you look at his 2019 combine, he was a huge disappointment.

“This year when I was at the Senior Bowl practices, the last day of practice, I was talking to some of the Giant people, they didn’t tell me he was a bad guy or anything, they said he’s dumb as dirt. He struggled taking instruction in coaching, he basically likes to do it his own way.” …
“I would have never taken that guy in the first round. Never,” Pauline said.

Ryan Dunleavy of the New York Post said a source told him there was a “battle in our building” over whether or not the Giants should select DeAndre Baker.

“There was a battle in our building on whether we were going to take DeAndre Baker or not,” a source privy to the Giants’ draft thinking told The Post, “because the story was he had to have his a– kicked every day to work hard at Georgia — to even go to practice. We knew that and we still drafted him, and from Day 1 it was like taking a guy in the first round that you had to teach nearly everything to.”

Red flags? Not from everybody
Our own Chris Pflum had nary a word to say about attitude/work ethic concerns when he did his prospect profile on Baker:

If the GIants are looking for a cornerback to replace Janoris Jenkins and create a young tandem with Sam Beal, then Baker could be a good one to look at.

He isn’t as highly regarded as he was entering the season, but that was coming off of a 2017 season in which he allowed just 5 receptions on 19 targets in 15 games (holding opposing quarterbacks to a completion percentage of 26.3 percent). Shutting opposing offenses down to that extent is not sustainable and regression was going to happen, and this season was seen as something of a disappointment.

On the field, DeAndre Baker shows quick feet and fluid hips which let him cover receivers tightly, at times appearing to run their routes for them. Georgia played a fairly diverse coverage scheme, asking Baker to line up in both man and zone coverages, and he played well in both. In man coverage, his feet and hips saw him through, while in zone his length, closing burst, and football IQ helped him stand out. He might be a better zone corner than man at the next level, if only because his long speed could be an issue dealing with faster receivers, but he should be able to hold his own in both.

It is possible that Baker could be one of the first two cornerbacks selected in the draft, but an uninspiring position group as a whole and the depth chart seems muddied. It is certainly possible that his lack of elite measurables will drop him to the second day

Drew Boylhart of The Huddle Report said he did not have major concerns at the time about Baker, whom he had given a second-round grade. He did, though, write this in a scouting report:
“There is nothing stopping DeAndre from being a much better player than I have projected him to be, all he has to do is be more of a leader than a follower in his play on the field. He has the talent and I think he has the arm span to make up for his lack of size. As soon as he becomes more of a team player this kid could be one of the steals of the draft. It’s all up to him.”

Scott Wright of Draft Countdown said his concerns were “Just maturity stuff on DeAndre Baker. Obviously nothing like this.”

Emory Hunt of Football Gameplan said “I don’t at all” when I asked him if he remembered having concerns about DeAndre Baker attitude coming out of Georgia.

“A lot of what I heard was concerns about his speed/athleticism,” Hunt said.
Former NFL GM Jeff Diamond told me he “didn’t hear of red flags on Baker” prior to the 2019 draft.
The scouting report in the draft guide published by The Athletic’s Dane Brugler even included praise for DeAndre Baker practice habits:

“… former Georgia DC Mel Tucker: “He works really hard in practice, he’s developed in the meeting room, he’s emerged as a leader for us.”

“Pesky press corner who has proven he can thrive against man-to-man challenges in a competitive conference. DeAndre Baker isn’t a burner, but has good play speed and the foot quickness and pattern recognition to stay tight in his coverage. The biggest issue teams might have with DeAndre Baker is determining whether or not he can give up 30-plus pounds against bigger, outside receivers and still hold up. While there might be some matchup concerns at times, his ball skills, talent and competitive nature should overcome his smaller frame.”

When I asked Zierlein about it he said:
“Got some [intel on Baker] after I wrote it [the scouting report] but not until before Combine. I ended up dropping his grade some because of it. Didn’t hear this kind of stuff, though. It was more about bailing on pre-combine workouts and the bad interviews at combine.”

Jeremy Attaway of SB Nation’s Dawg Sports, which covers Georgia, had this to say when I asked him if he had heard character concerns about Baker.

“No. Obviously 80 percent of kids recruited from south Florida have some friends/associates who should make any GM uncomfortable if they’re hanging around. But the guy never got in trouble in Athens under [Mark] Richt or [Kirby] Smart,” Attaway said.

“Bit of an attitude, sure. But it’s a pretty big leap for me from “Deandre doesn’t really like to practice” (a thing I’ve actually heard and which could honestly be said about a lot of guys) to “Deandre just committed an armed robbery” (a thing I frankly never expected to hear).”