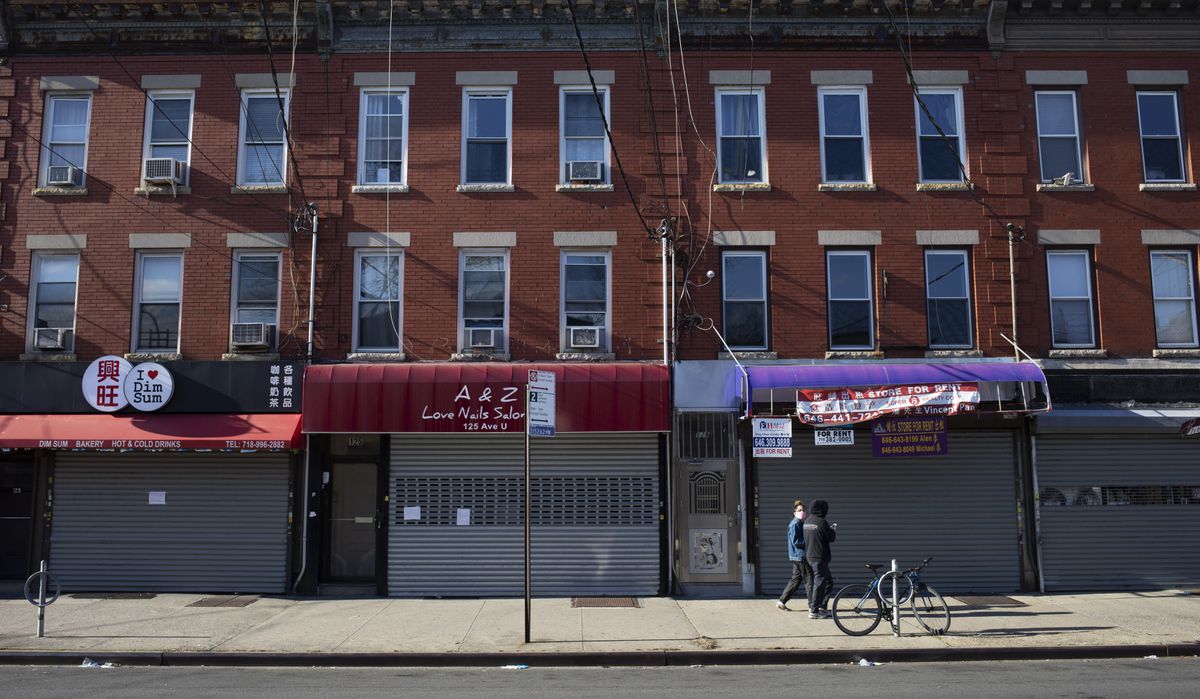 By Aaron Glantz Reveal from Center for Investigative Reporting | Apr 23, 2020 | 9:09 PM People wearing masks walk past stores closed because of the coronavirus outbreak, Saturday, April 4, in the Gravesend area of the Brooklyn borough of New York.(David Boe/AP) From his office in Bismarck, North Dakota, Alan Haut started preparing for the coronavirus relief bill before it had even been passed by Congress.

North Dakota had experienced only a handful of deaths from the COVID-19 pandemic, and the state’s Republican governor, Doug Burgum, hadn’t issued a shelter-in-place order or required businesses to close. But as district director of the federal bailout Small Business Administration office in Bismarck, Haut wanted to be ready.

So he began convening community banks and entrepreneurs and sharing early drafts of applications to what would become the $349 billion Paycheck Protection Program, with an eye toward ensuring that prairie businesses would be able to get access to loans as soon as the application period opened.

On April 3, the morning applications opened, Jeff Zarling, founder of DAWA Solutions Group, a software company that also puts on an annual oil industry trade show, drove to First International Bank & Trust, whose branch in downtown Williston (population 14,716) was still open, and dropped off a flash drive with his complete application.

“My banker knows my situation, and we communicate through the year,” Zarling said. “So I simply had to run a few financial reports, which took less than an hour.” Republican states disproportionately benefited from the federal government’s efforts to bail out small businesses hard-hit by the coronavirus pandemic, an analysis by Reveal from the Center for Investigative Reporting found.

(Gabriel Hongsdusit / Reveal) It wasn’t long before Zarling learned he would get help. Although sponsorships for the October trade show have dried up as oil prices have crashed, Zarling said the federal bailout money has allowed him to avoid layoffs.

That’s because the federal government is keeping his workers paid. This was the purpose of the Paycheck Protection Program: to subsidize vulnerable small businesses and avoid massive layoffs. The loans will be forgiven entirely under certain conditions, including a requirement that a company keeps all of its employees on the payroll for at least eight weeks. Within weeks, the Small Business Administration had exhausted the $349 billion appropriated by Congress, a pace that President Donald Trump has called it “an incredible, incredible success.”

An analysis of 1.6 million Paycheck Protection Program loans by Reveal from The Center for Investigative Reporting found that 58% of North Dakota’s small businesses got loans through the program. A majority of small businesses in Nebraska and South Dakota, neither of which have shelter-in-place orders, also received help.

It was a different story, however, in states with high death tolls and some of the earliest stay-at-home orders prompted by COVID-19. In New York and New Jersey, where more than 350,000 are infected and more than 20,000 have died, just 18% of businesses got help, Reveal’s analysis found.

In California, where more than 3 million workers have filed for unemployment after that state became the first to issue a stay-at-home order, that number was 15%. (Reveal is among the California businesses that received a loan under the program.) A woman walks past closed storefronts amid the COVID-19 pandemic Monday, April 20, in the Boyle Heights section of Los Angeles.

(Marcio Jose Sanchez/AP) The figures were so stark that they sparked concerns of political interference. Rep. Jackie Speier, a California Democrat who serves on the House Oversight and Reform Committee, said the data raise questions about whether stimulus dollars were deliberately funneled to states that voted for Trump and have Republican governors.

Speier told Reveal that she would be calling for an investigation by the Government Accountability Office, the investigative arm of Congress. Reveal’s analysis found that businesses in states that Trump won in 2016 received a far greater share of the small-business relief funds than those won by his Democratic rival, Hillary Clinton. Eight of the top 10 recipient states – ranked according to the proportion of each state’s businesses that received funding – went to Trump in 2016. Meanwhile, seven of the bottom 10 states, where the lowest proportion of businesses received funding, went to Clinton.

Taken together, 32% of businesses in states that Trump won got Paycheck Protection Program dollars, we found, compared with 22% of businesses in states that went to Clinton. “As far as the president of the United States is concerned, if he can stick it to California, he will,” she said. In this April 4 photo, pedestrians pass closed stores on Roosevelt Avenue in the Queens borough of New York.

(Frank Franklin II/AP) Miryam Mora Barajas, a spokesperson for the Small Business Administration, brushed aside allegations of favoritism and said the agency is treating every business fairly. “The system was created on a first-come, first-served basis,” she said. As to why less-populous Republican states without shelter-in-place orders were receiving loans at far greater rates than large Democratic ones hit hard by COVID-19, she said, “I’m a federal employee and don’t comment on politics.”

Meanwhile, businesses in the epicenter of the epidemic are facing devastation after being shut out of loans. “A few curse words come to mind,” said Amanda Bender, whose two Brooklyn, New York, restaurants have been shuttered for a month. She had to furlough all 42 of her workers without pay.

When the application period for the Paycheck Protection Program opened April 3, she was home with a 102-degree fever, as ambulance sirens shrieked through New York’s empty streets. Isolated at home, though unable to get tested for COVID-19, Bender said her business partner submitted online applications to save both restaurants – Glady’s, a Caribbean restaurant in Crown Heights, and Mo’s Original, a comfort food joint near Prospect Park – through two banks, Capital One and JPMorgan Chase, the day the program opened.

But she said their application appeared to go into a black hole. She watched nervously as all the money was spent, without ever receiving an answer from either bank or the Small Business Administration. Neither bank immediately responded to queries from Reveal.

The failure of the coronavirus rescue package’s signature loan program to reach small businesses most at risk during the pandemic has emerged as a major issue for lawmakers and advocates. Journalists have documented that a substantial share of funding meant for small businesses went to large publicly traded companies, profitable oil companies and hotel and restaurant chains, including Shake Shack – which, after a wave of controversy, said it was returning its $10 million loan.

A closed eating area inside Grand Central Station is seen in March. (Luiz C. Ribeiro/for New York Daily News) But Reveal’s analysis shows that the aid was also misallocated when it comes to where the crisis is most acute. Not only did businesses in states without shelter-in-place orders get federal small-business dollars at far higher rates than those in states hit hard by the pandemic, but worker by worker, those states did better as well.

North Dakota small businesses got about $8,000 in aid per worker, on average, while California businesses received $4,600 per worker and those in New York, $5,000 per worker. Those coastal states also have higher average pay and cost of living. This stark disparity is unlikely to be solved by the new infusion of funds allocated by Congress this week, which adds $310 billion more to the small-business loan program and directs about 20% of that funding to be dispersed through community banks, minority-owned banks and nonprofit community development financial institutions, which serve poor neighborhoods in both rural and urban America. “It’s going to be somewhat helpful, but it’s not a solution,” said Ilana Preuss, founder and CEO of Recast City, a Washington, D.C., firm that helps small manufacturers.

“We are still going to see thousands that applied who never receive the funding.” Speier said she was concerned her constituents would continue to be cut out but voted for the latest bill “for the hairstylist whose business is the sole source income for her daughter and her granddaughter and the restaurant that may never reopen again.,” in the hope that they may receive help. Barajas, the Small Business Administration spokesperson, said her agency will continue to handle applications on a first-come, first-served basis, but the clock for each application begins not from the moment the business submits materials to its financial institution, but from the moment the bank submits that application to the government. So if the bank doesn’t quickly pass that application on to the Small Business Administration – a more significant challenge for banks in states with shelter-in-place orders and high case numbers – the business could easily lose out. The American Bankers Association, an industry trade group, declined to comment for this story. One bitter pill for small-business owners like Bender, the Brooklyn restaurant owner, is that, according to Barajas, businesses that applied for the first round of loans will not automatically be reviewed when the program is up and running again. “There is no waiting list,” Barajas said. “The moment the appropriation ran out, banks were no longer able to enter information.” As the wave of death that hit New York subsides a bit and small cracks of daily life resume, Bender said she’s been able to rehire four of her restaurants’ 42 workers by launching takeout service two days a week at Mo’s Original. The community support has been great, she said, but the orders are a sign of how New York is still deep in crisis. Coronavirus in New York: How the state has been changed by the outbreak Dishes such as smoked chicken are frequent favorites, she said, but equally common have been requests for suddenly scarce staples such as flour, noodles and whole-bean coffee. With COVID-19 still widespread in the community, she’s wary of bringing more people back to work in Mo’s compact kitchen. “Everything has to be sanitized, and I worry about there being too many people in that space,” she said. Public health experts, she noted, still don’t want people to go to work. They want them to stay home and stay safe. And that’s what the Paycheck Protection Program was originally supposed to do – allow businesses like hers to keep workers on payroll even while the pandemic prevented them from going in to work.
Read More