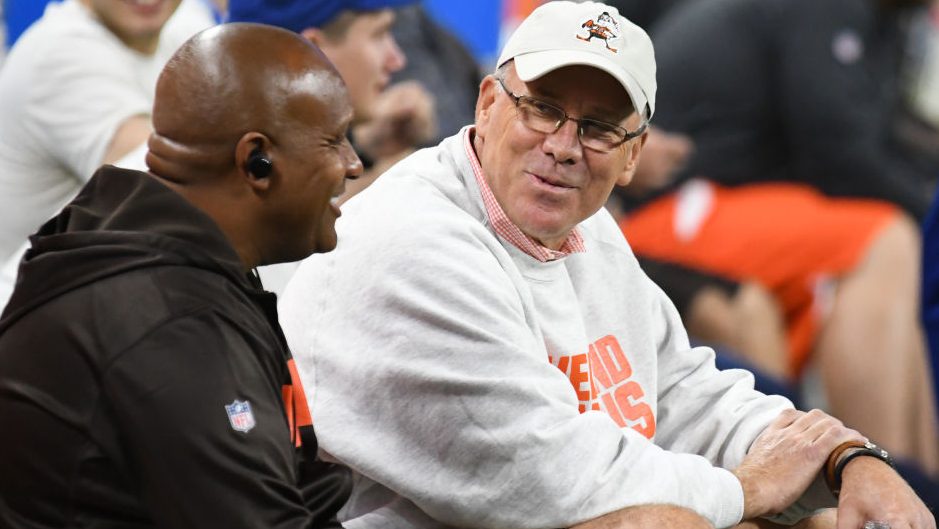 If the Browns and Seahawks were talking in 2018 about a potential trade that would have sent quarterback Russell Wilson from Seattle to Cleveland, the man who coached the Browns at the time didn’t know anything about it. Which, given the overall dysfunction in Cleveland at the time, should surprise no one.

Hue Jackson said he wasn’t aware of any discussions

Appearing with Zach Gelb on CBS Sports Radio, Hue Jackson said he wasn’t aware of any discussions that may have happened between his then-boss, John Dorsey, and Seahawks G.M. John Schneider regarding a potential Wilson deal. But Jackson didn’t completely rule out the notion that the two men had a conversation about the possibility.

“I’m sure John and John Schneider are really tight,” Hue said of the former Packers’ colleagues, “and I’m sure if they’re having conversations on their own and just jiving around and doing those kinds of things. I would think if something was serious about that, we — the executive team — and the organization would have known.”

So maybe they talked about it, and maybe it never got to the point where Dorsey raised it with Hue or ownership. Because maybe Dorsey didn’t want Hue Jackson or the rest of his coaching staff or ownership to know it was a possibility.

Hue Jackson said that he doesn’t think Dorsey would have wanted to do the deal. Which, if Hue’s read is right, makes it even more important that Dorsey keep it to himself, in order to prevent an owner who keeps a large ladle in the stew (while acting like he doesn’t) from becoming smitten with the idea of landing Russell Wilson.

Then there’s the possibility that Dorsey kept it to himself during the preliminary discussion phase didn’t trust Hue Jackson to keep his mouth shut about the possibility. Given the media relationships Hue has cultivated for the purposes of helping advance his career when needed, Dorsey probably made the right call in being discreet, if there were indeed conversations.

A critical wrinkle didn’t come up in the Hue Jackson interview: If the Browns had traded for Wilson they would have stepped into the looming obligation to give him a market-setting contract. By taking Mayfield, the Browns will get several years of quarterback play at a much lower cost, allowing money to be spent elsewhere.

That’s why Schneider would have floated the possibility, to reset the Seattle quarterback-compensation clock to “rookie wage scale,” so that the team could load the cannon around a competent young quarterback and compete for championships before breaking over the piggy bank to reward the quarterback financially. And that’s why there’s a lingering sense the Seahawks will eventually entertain the possibility of moving Wilson before giving him yet another contract that makes him the highest-paid player in league history.

As Cowboys exec Stephen Jones said last week on the #PFTPM podcast, it’s hard to win with a quarterback who gobbles up a huge chunk of salary-cap pie (even though, for the Cowboys, it’s now inevitable that Dak Prescott will). At some point, some team is going to run the numbers and decide that, with all the great young quarterbacks entering the league on a regular basis, it doesn’t make sense to keep pushing the market to a new level every time the current quarterback is due to get a new contract.

The Seahawks at least considered the possibility in 2018, even if Dorsey wisely didn’t share that information with Hue Jackson or Jimmy Haslam.