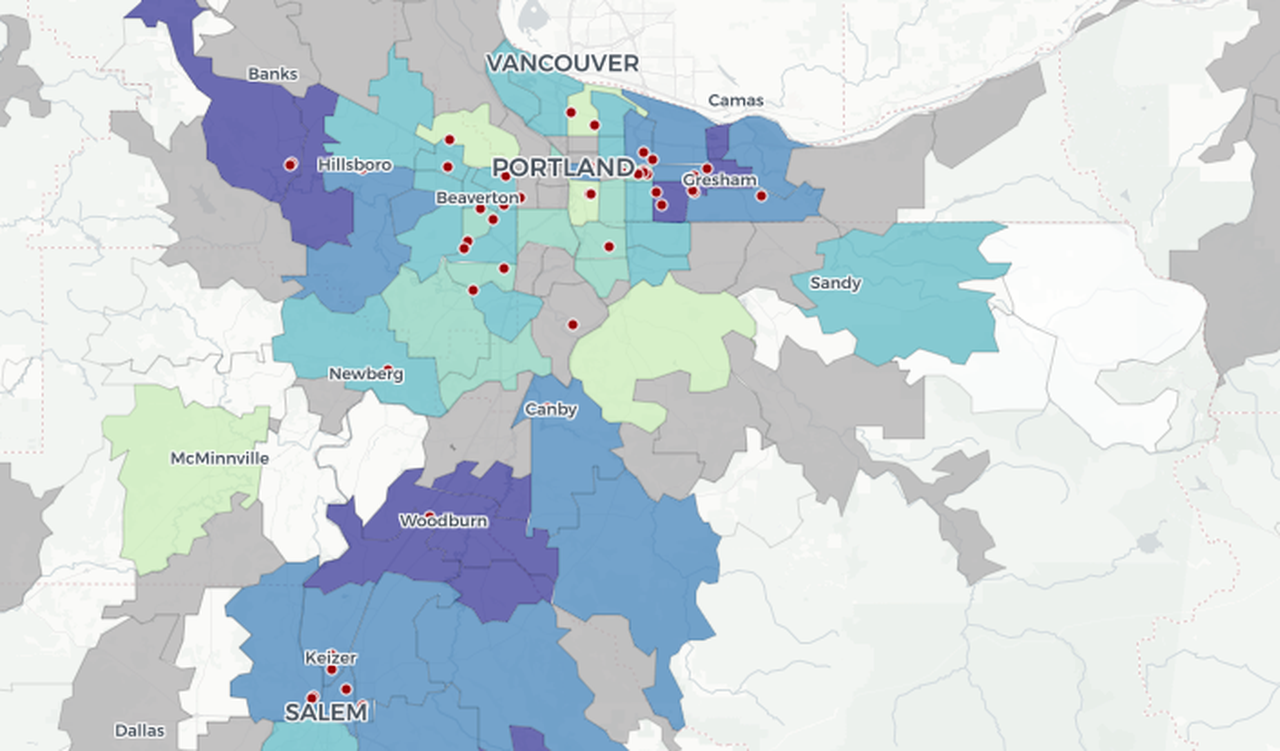 An outbreak at a senior care home in West Salem produced the single largest weekly spike of reported coronavirus infections throughout Oregon, according to an analysis of newly released state data by The Oregonian/OregonLive.The number of coronavirus infections reported in the 97304 ZIP code more than doubled from 30 to 63 for the week ending Sunday.

(See map of Oregon coronavirus infections mapped by ZIP code)Fully 41 residents, workers or close contacts linked to Prestige Senior Living Orchard Heights, an assisted living and dementia care center, have been infected with the virus, according to a state report. Four people tied to the Polk County community have died.

The data released Tuesday by the Oregon Health Authority show detailed counts for 2,805 of the 3,268 infections identified through Sunday, capturing about 86 percent of all cases. The newsroom was able to pinpoint 410 new infections by ZIP code compared with the previous week’s results.

Coronavirus infections continued to climb in many of the same neighborhoods that have already been hardest hit, the analysis found. Several of those ZIP codes are home to outbreaks at nursing homes or other congregate living facilities.Six ZIP codes in east Portland, Gresham and Troutdale added a combined 86 cases since last week, an increase of 22%.

The figures represent where a person who has been infected lives; not necessarily where they were infected.“The goal of releasing the data is to help people better understand the extent of community-based spread of the virus,” Lillian Shirley, the state’s public health director, said in a statement last week.

“We are committed to being transparent and accountable to all the communities we serve, especially those hardest hit by the pandemic.”Multnomah County’s public health director, Rachael Banks, dismissed the importance of the data and said it’s more important to focus on where people were infected rather than where they live, which could perpetuate bias.“It’s about where you’re exposed,” she said last week. “It’s about your exposure.”The Oregonian/OregonLive subsequently requested documentation from Multnomah County disclosing addresses associated with known outbreaks at workplaces of at least five or more cases. The newsroom also asked for ZIP code level data showing where people were exposed.The Oregonian/OregonLive clarified that if Multnomah County had exposure data in other formats, that would be acceptable.A county spokeswoman, Kate Willson, responded Tuesday that officials would not disclose outbreak addresses because that information can be kept confidential under Oregon law.Willson also said in an email that the county does not have ZIP code data for the location of exposure and is not required to create a map.“We have published a regional dashboard, updated daily, that provides the data we believe is useful for the community to understand disease patterns and who is most at risk,” she wrote.The dashboard does not include information about where infected Oregonians were exposed to the virus.– Brad Schmidt; bschmidt@oregonian.com; 503-294-7628; @_brad_schmidtSubscribe to Oregonian/OregonLive newsletters and podcasts for the latest news and top stories.Note to readers: if you purchase something through one of our affiliate links we may earn a commission.
Read More