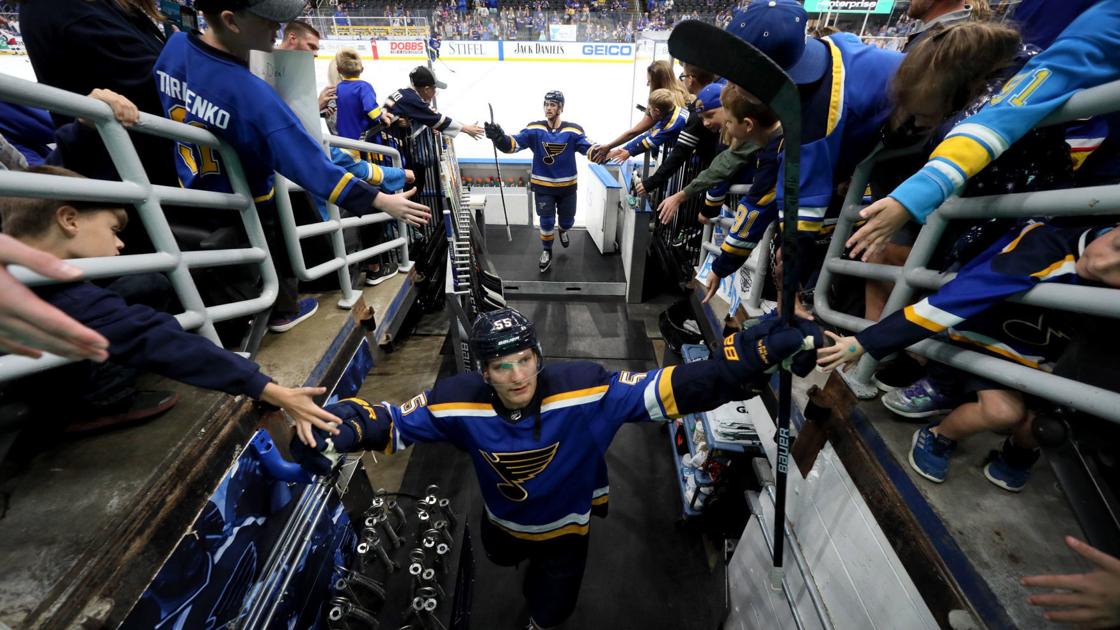 Fans reach out for Blues defenseman Colton Parayko as he walks back into the dressing room following a pregame warm-up at Enterprise Center. (David Carson photo, dcarson@post-dispatch.com)

The first blip of movement toward restarting the NHL season which has been on pause since March 12 came on Friday night, when the NHL Players Association announced that its executive board had authorized further negotiations with the league on a 24-team format that would lead, they hope, to the Stanley Cup.“Several details remain to be negotiated and an agreement on the format would still be subject to the parties reaching agreement on all issues relevant to resuming play,” the NHLPA said.

Precisely what that format will look like is not known for sure – an announcement on that could come next week — but with 24 teams, the obvious, and most widely reported, system is that the top four teams in each conference, including the Blues, would get a first-round bye, while teams five through 12 in each conference would meet in a best-of-five play-in round to winnow the field down to the now-standard 16-team playoff, which would be a best-of-seven series from then on. It would also mean the regular season was over and the seven teams that didn’t make the expanded postseason would begin their offseasons.The plan still needs to be approved by the league, but the Return to Play committee, which worked on the plan, was made up of league executives and players, so support from the league seems likely.There are many issues not related to 24-team format that still need to be determined, such as whether or not the players will be held in quarantine for the entirety of the postseason and the prevalence of testing for the coronavirus. Some players have expressed reluctance to go potentially three months away from their families, as well as the possibility of contacting the illness. According to a report from TVA sports network in Canada, the vote of each team’s player representative was 29-2 in favor of the 24-team format.But the format is also a calendar without numbers. There is still no clear idea of when games would resume and with the players wanting at least a three-week training camp, it is still at best more than a month away. Commissioner Gary Bettman said last week that the league would need ample testing for the coronavirus and didn’t want to jump in line and take it away from needs in the medical community.Ultimately, of course, the Blues were going to be in good shape regardless of what format was settled on because they had the best record in the West. If the most-discussed format is adopted, the top four seeds in the West, Blues, Colorado, Vegas and Dallas, would take part in a round-robin tournament so they could get in games during their bye period, and those games would be used to determine the teams’ seeding for the next round. But how that will work, and whether the top teams will get some bonus for their play in the regular season, is not known.One issue that could be of interest to the Blues is whether or not the league sticks to a fixed bracket. There could be a big difference in playoff opponents this season, and with the top teams such as the Blues losing home-ice advantage, it’s been argued that it would be fairer to avoid a situation where the No. 4 seed faces the 12th-seeded Blackhawks in the second round if they win their play-in series, while the No. 1 seed faces the No. 8 seed. The league, however, seems inclined to have a fixed bracket.The first physical step in the road back to hockey will be opening up club training sites for individual, then small group, work. That will eventually lead to a three-week training camp and only then to games, which now appear likely to be held at two hubs, one east and one west. Though the Blues have put in a bid for games to be played in St. Louis, Las Vegas stands as the most likely candidate in the West. All of the games would be played without any fans.The size of the field still caused some concern. While some teams were just points out of a playoff spot when the season stopped, others were further out and had little or no chance of advancing. But numerically, 24 teams works better for this kind of thing than 22 teams, so Chicago, which had a 3.4 percent chance of making the playoffs at moneypuck.com, and Montreal, which was at 0.2 percent, got in, and now have substantially better probabilities of possibly winning the Stanley Cup.If the Blues were to remain the No. 1 seed when the 16-team portion of the playoffs began, they would get either the No. 8 or 9 team, either Winnipeg or Calgary.Bettman has said eight or nine cities have put in bids to be the hosts, and the Blues have said they have expressed interest. The leading candidate for the west is Las Vegas, but the league is going to hold off on naming a location until they know when they’ll start, in case the conditions in that city don’t accommodate the league at that time.In the Western Conference, the play-in series, with seeds, would be: Edmonton (5) vs. Chicago (12), Nashville (6) vs. Arizona (11), Vancouver (7) vs. Minnesota (10) and Calgary (8) vs. Winnipeg (9).In the East, Boston, Tampa Bay, Washington and Philadelphia would be the top seeds. The play-in series would be Pittsburgh (5) vs. Montreal (12), Carolina (6) vs. New York Rangers (11), New York Islanders (7) vs. Florida (10) and Toronto (8) vs. Columbus (9).

We’re providing access to COVID-19 articles for free.
Please help support our work by subscribing or signing up for an account.
Already a subscriber? Log in.

He had 31 goals and 32 assists for Dynamo Moscow in his first season after leaving the NHL.

He’s taken Lindenwood to the national club championship and had a shot at another title this season; next he’d like to lead them to the NCAA level

A 24-team playoff format is the proposal; the Blues would get a bye into the round of 16.

See what Post-Dispatch hockey writer Tom Timmermann has to say about Blues issues in his live chat.

Fans of the defending Stanley Cup champions weigh in on the state of the sport during the pandemic.

Team president and CEO Chris Zimmerman is working on having St. Louis as a pod city, if NHL returns under that format.

Fans reach out for Blues defenseman Colton Parayko as he walks back into the dressing room following a pregame warm-up at Enterprise Center. (David Carson photo, dcarson@post-dispatch.com)