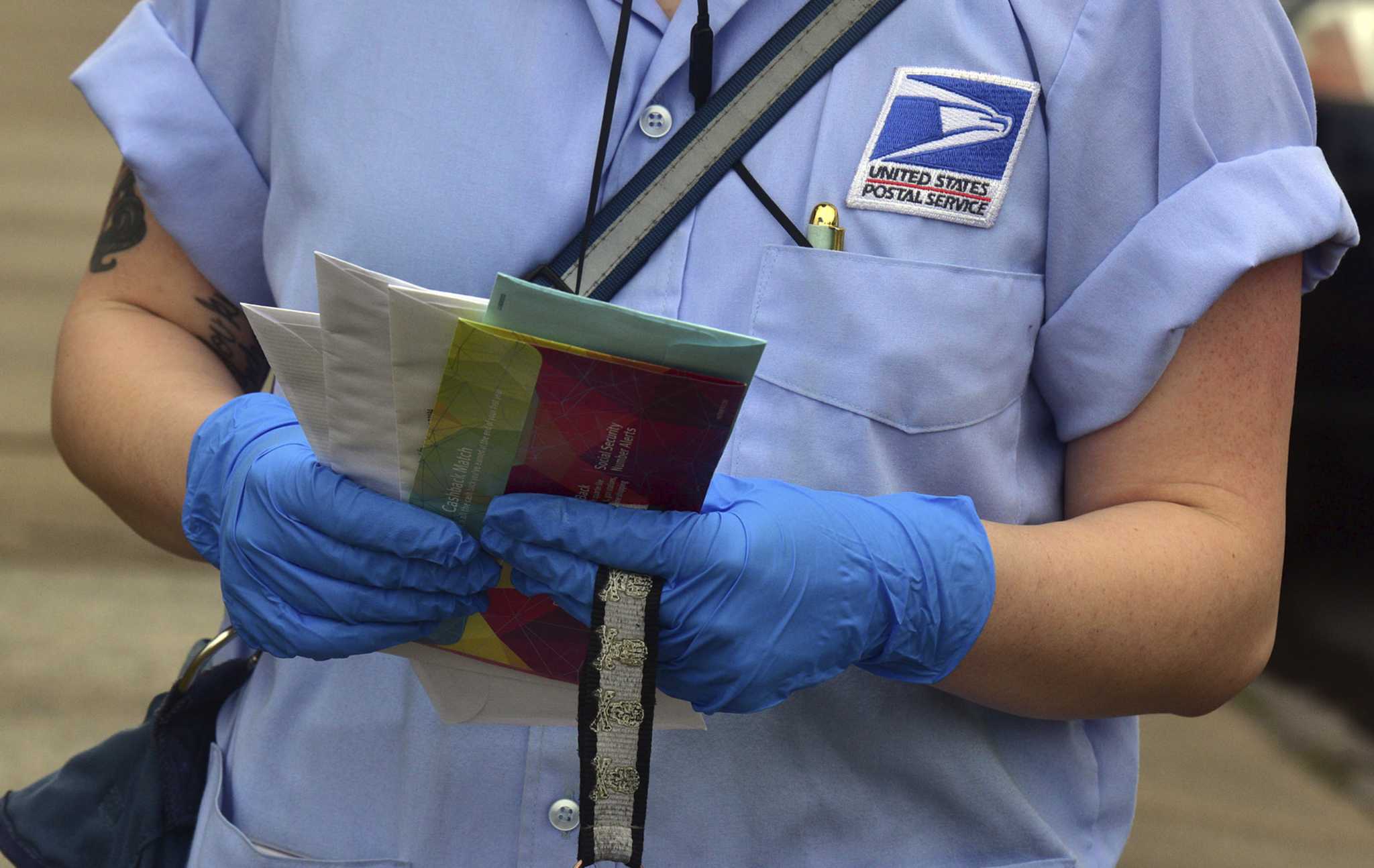 Trump is planning to impose tax measures on delivery services

Officials working under Treasury Secretary Steven Mnuchin, who must approve the $10 billion loan, have told senior officials at the USPS in recent weeks that he could use the loan as leverage to give the administration influence over how much the agency charges for delivering packages and how it manages its finances, according to the two people, who spoke on the condition of anonymity because the talks are preliminary.

Trump has railed for years against what he sees as mismanagement at the Postal Service, which he argues has been exploited by e-commerce sites such as Amazon, and has sought to change how much the agency charges for the delivery of packages.

(Amazon’s founder and chief executive Jeff Bezos owns The Washington Post.)Under the $2 trillion coronavirus stimulus relief passed last month, the Treasury was authorized to loan $10 billion to the USPS, which says it may not be able to make payroll and continue mail service uninterrupted past September.

Mnuchin rejected a bipartisan Senate proposal to give the Postal Service a bailout amid the negotiations over that legislation, a senior Trump administration official and a congressional official previously told The Post.

The borrowing terms have only been discussed among both agencies’ leadership and have not been made public because the Postal Service hasn’t officially requested the loan, the two people familiar with the matter said. Mnuchin could still decide not to pursue tough terms as the September deadline nears.

The Postal Service would not have to use the entire $10 billion loan at one time, but could borrow up to that amount at any given time.In discussions with senior USPS personnel, Treasury officials have said they are interested in raising rates on the Postal Service’s lucrative package business, its sole area of profitability in recent years.

Treasury also could review all large postal contracts with package companies to push for greater margins on deliveries. Treasury officials have said they may press the agency to demand tougher concessions from its powerful postal unions — among the public-sector unions that still retain significant leverage in negotiations with the government.

The officials have also said Mnuchin wants the authority to review hiring decisions at the agency’s senior levels, including the selection of the next postmaster general, a decision that until now has been left to the Postal Service’s five-member board of governors.

USPS spokesman David Partenheimer confirmed in an email that the agency and Treasury have begun “preliminary discussions” over the loan, but that the Treasury had not yet asked “to impose any of those conditions on that borrowing authority.” He declined to say whether these or any other terms were under discussion.

A Treasury spokesman said the department began preliminary discussions on the terms of the loan, but cautioned it was too early to comment on those conversations.Amazon did not respond to requests for comment.

The Postal Service has repeatedly drawn on an open $15 billion line of credit Congress authorized nearly 30 years ago, as the agency’s finances have been squeezed by the demise of the traditional mail business and rising pension costs.

That loan comes without any terms and low interest rates. USPS has paid down the debt in recent years, but has never fully paid off the loan. On April 1, the Postal Service borrowed another $3 billion to help weather the pandemic, bringing the agency up to $14.4 billion from that line of credit.

Usually, the agency’s business decisions are made by its board of governors, who are appointed by the president, and an independent entity called the Postal Regulatory Commission, which ensures that the Postal Service charges rates for its services that cover its costs.

If Mnuchin were to gain greater control through the new loan, a slew of Postal Service management decisions, including the terms of major contracts and collective bargaining strategy, could require Treasury’s approval. Hiring and firing of senior executives could be required to be run by Treasury, the two people familiar with the matter said.Trump has taken aim at the Postal Service since early in his tenure, initially urging the agency to double the rates it charges Amazon and other firms for delivery.

The agency has been decimated by the decline in first-class mail over recent decades, but one bright spot has been package delivery. The Postal Service competes vigorously with UPS and FedEx and even Amazon’s own delivery services, and it specializes in the “last mile” delivery to a customer’s home.Trump frequently repeats the claim that higher package rates on Internet shipping companies — Amazon, in particular — could ease the Postal Service’s financial troubles.

The Postal Service repeatedly has defended its arrangement with the e-commerce giant, saying it gets fair rates for the services it provides in a highly competitive environment.Higher Postal Service rates could hurt the USPS by artificially raising its price above those of UPS and FedEx, analysts say.

It would also hit Amazon because the company contracts for “last mile” deliveries more frequently than its competitors.UPS spokeswoman Kara Gerhardt Ross in an emailed statement called the Postal Service “an important partner for us in delivering to communities,” especially during the pandemic.“At the same time, the USPS would benefit from modernizing both their cost attribution methodologies to reflect the past decade’s growth in the competitive package market,” she said.FedEx in a statement said it had “long supported” postal reform to give the Postal Service “the ability to adapt and prosper in a rapidly changing market.

”“FedEx has consistently urged Congress to give USPS the managerial flexibility needed to compete effectively,” the company said, “while also holding it accountable to the same rules, market forces and incentives as its private sector competitors.”The familiar mail carriers in the USPS’s iconic blue and white trucks have continued delivering mail and packages to a country under quarantine.

The Postal Service remains a vital conduit of information for the dwindling proportion of the population that isn’t online.A Postal Service spokesman said 1,219 workers of the Postal Service’s 630,000-person workforce have tested positive for the coronavirus. Forty-four workers have died, according to the American Postal Workers Union, one of several labor groups that represents USPS employees.

The Postal Service is projecting a $13 billion shortfall this year because of the pandemic, with mail volume down about 30 percent since the virus forced businesses to scale back advertisements, catalogues and other mail. A jump in package deliveries to homebound customers has not fully compensated for those losses.

Postmaster General Megan Brennan asked lawmakers this month for an $89 billion bailout that would include funding to make up for losses because of the pandemic, new money for modernization and $39 billion in restructured debt.

The Postal Service’s plight has recently been attracting the attention of lawmakers in both parties. Sen. Bill Cassidy (R-La.) told donors on a call last week that he wanted postal unions to make concessions on salaries and benefits to help the Postal Service’s finances.

Senate Minority Leader Charles E. Schumer (D-N.Y.) said Tuesday that relief for the Postal Service should be part of a “Phase IV” stimulus package.At an Oval Office meeting more than a year ago, Trump decried to aides what he viewed as the dysfunction of the Postal Service and reiterated long-standing grievances about the costly effect on American taxpayers, according to one former senior administration official present at the meeting.

But the treasury secretary has so far found a career staff at the Postal Service that has resisted his efforts at change. Mnuchin created a task force that released a 74-page study in 2018 that called for some of the same changes Treasury may ask for now, namely cutting labor costs, restructuring third-party service agreements and increasing package rates.

“Require price increases, reduce service costs, or exit the business for any mail products that are not deemed an essential service and do not cover their direct costs,” the report recommended.But the recommendations went nowhere, in part because the agency lacked a quorum on the board of governors.

They also faced political opposition in Congress and among union ranks to curtailing postal routes and other services.Last fall, Mnuchin sent his deputies to present a new board largely made up of Trump appointees with a slate of changes that attached terms to the remainder of the Postal Service’s customary $15 billion line of credit, breaking with a nearly five-decade precedent of generous terms of postal borrowing.

But career postal staff balked at the terms and USPS leadership swiftly rejected them.“Treasury is going to want to see some of these recommendations implemented,” said Paul Steidler, a postal expert at the Lexington Institute, a conservative think tank focused on security-related issues.

Democrats say Mnuchin will be making a mistake if he tries to impose stringent terms on the new loan.“If Mnuchin wants to play this kind of game with the Postal Service, I think it is time for the Postal Service to tell him they’re not going to agree to unacceptable conditions, and that means Mnuchin will have on his hands the disruption of services this fall,” said Rep. Gerald E. Connolly (D-Va.), who chairs the House subcommittee in charge of postal oversight.

“I think it’s time to stare him down and this White House down, and for Congress to decide [if we are] going to stand with the Postal Service as we know it.“This is an essential service and it needs to be treated as such. My hope would be that the Postal will stare him down.

If they don’t, it’s tantamount to handing over day-to-day management to the Treasury Department.”Connolly and Rep. Carolyn B. Maloney (D-N.Y.) joined Sens. Gary Peters (D-Mich.) and Thomas R. Carper (D-Del.) in an April 3 letter to Mnuchin asserting Congress’s oversight authority for the Postal Service.

“We strongly urge you to make this loan to the Postal Service in a timely manner, under fair terms that comply with the intent of the Cares Act,” the letter states. “We expect the Treasury Department to fully comply with federal statutes and refrain from setting any conditions that would infringe on the Postal Service’s statutory authorities.”Staff writers Josh Dawsey and Jeff Stein contributed to this report.
Read More