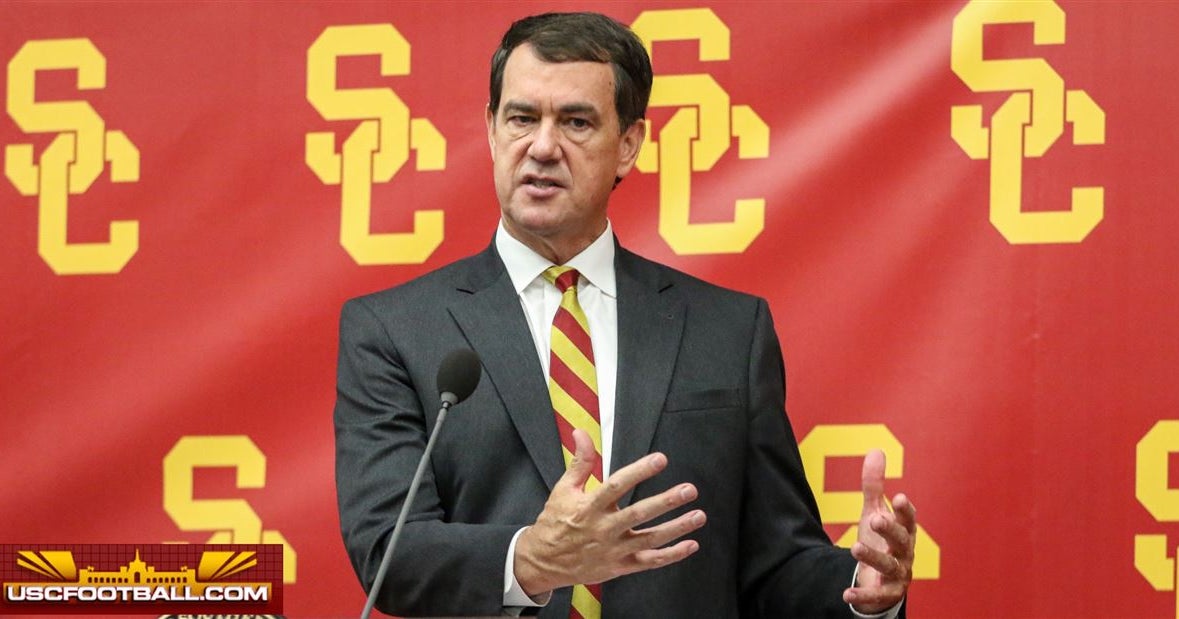 For the second time in a span of five seasons, USC is slated to open its season with a marquee matchup against Alabama at AT&T Stadium in Arlington, Texas. However, multiple reports surfaced Tuesday claiming that the contest might not go on as scheduled. USC Director of Athletics Mike Bohn took to Twitter to refute the issue Tuesday night.

“I enjoy regular conversations with [Alabama athletic director] Greg Byrne,” Bohn wrote. “We have every intention of playing our game against Alabama. I’d like to remind all our fans that this is an uncertain time and there will be much disinformation. We continue to explore every model for the 2020 football season. We will certainly communicate relevant updates when we have them.”

Finebaum was the first to cast doubt Tuesday on the chances of USC vs. Alabama being played come September. During an appearance on ESPN’s Get Up, Finebaum said that Alabama has reportedly been in communication with TCU football on the Horned Frogs possibly filling in for USC in the neutral-site matchup should state or federal regulations prevent the Trojans from making the trek all the way from California to Texas. The new configuration would make sense for both TCU and Alabama, not only because the Horned Frog’s campus is just 18 miles away from AT&T Stadium, but also because TCU could face a similar predicament regarding its own current schedule, as the team is currently slated to head out west for a matchup at Cal in Week 1.

“There’s already scrambling going on,” Finebaum said. “Alabama plays Southern Cal in the first game of the season at [AT&T Stadium], and there’s already talk going on between Alabama and TCU about meeting instead of the other two because TCU plays at Berkeley and the California schools, they do not believe, will be available for that date.”
Cowherd followed up Tuesday afternoon with a similar sentiment. He tweeted: “Told by two people I trust — USC v Alabama isn’t happening. Trojans can’t even practice in LA potentially for several months. This is why Bama already talking to other possible opponents. Not official but understood. Feeling now that Pac 12 football in spring — much more likely.”

While kickoff for the college football season is still more than three months away, the current health crisis has generated a thick cloud of uncertainty over what the 2020 season will look like, including whether or not it will begin on time or even include non-conference play. The potential for travel restrictions at either the state or federal level — some states have already issued such — is one the key factors in that ongoing discussion. USC head coach Clay Helton said Monday that the Pac-12 Conference is considering the possibility of playing 11 conference games without the addition of non-conference matchups — a move that would eliminate the USC-Alabama and Cal-TCU games if it came to fruition.

“That is one of the many structures as we go through this situation and this crisis, the possibility of an all-conference schedule,” Helton said.

Under current regulations, travel complications would arise for USC and TCU — USC while heading to Arlington and TCU returning home from Berkeley — if the existing Week 1 matchups are held as scheduled in their respective locations. Texas Gov. Greg Abbott issued an order in March that indefinitely requires air-travelers entering Texas from a number of locations, including incoming air-travelers from anywhere in the state of California, to enter a mandatory 14-day quarantine upon arrival to the state.

On Tuesday, TCU athletic director Jeremiah Donati told the Fort Worth Star-Telegram that the school is still preparing to play Cal in Week 1 and that “if we determine at some point that we cannot do so, we’ll look at other options.” Donati previously told the Star-Telegram back on April 21 that both TCU and Cal “agreed that we need to look at all potential options with regards to our scheduled game” and expected the situation to become clearer in a matter of “30-45 days.” “>247Sports
Read More